When you are looking for a baby swing definitely, size of the product does matter. No matters how big or small home that you have got. Graco Simple Sway Baby Swing or baby gear is the perfect product for them who are concern about space. It fits clearly in a small space or right in the corner of the house. The price of the product is very affordable, cheap and fair. 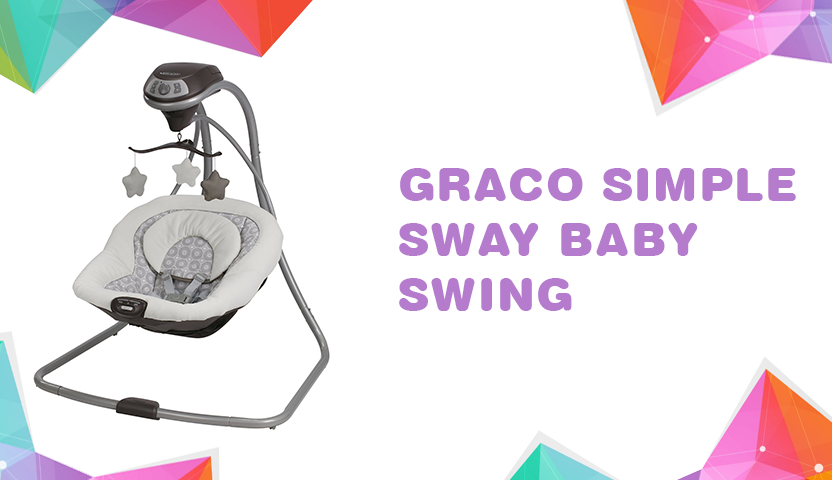 In front of the chair a soothing vibration is fixed. Two different settings here for the vibration that is to be adjusted. The switch is pressed and moved from right to left. You can use it in the swing or when it is down on the floor. The vibration is run off by both the battery and the power. Baby gets calm and relaxed by the vibration of the swaying.

An insert is enclosed to save the baby from falling off to the ground. Two belts are attached to the swing to tighten up your baby.

Fabric Of the swing

A well stitched and knitted fabric is wrapped up in the swing. The fabric feels unbelievably soft, comfortable and convenient.

Weight of the baby

The weight of the baby should not be exceeding for more than 5.5 to 30 pounds for this particular swing. This is the ideal range of the weight of the baby. If your baby’s weight is more than thirty pounds then Graco Simple Sway Baby Swing would be unfit for your baby. Therefore, it is highly recommended to check the baby weight before purchasing this product.

Music button is there to revive up baby with fun and joy. Ten melodies and five nature sounds are to be inserted in Graco Simple Sway Baby Swing. The sound tracks have also been adjustable according to your baby’s mood.

At the top of the swing three toys are hanging to engage your baby from doing different activities. Three stars are hanging along with a hanger.

A button is placed on the middle of the switchboard where you can turn on the chair or swing. Speed limit is there from range one to six. When the turn on button is pressed, the swing started to move or glide. The speed limit is there if you press 1 then it will move slowly and gradually increase the speed if you press six. In range 1 the swing will glide or move very gently and in range 6 if your baby is heavy then it won’t move too fast as you have expected.

In the middle of the user controller box a round shaped volume controller is set up to control the swing glide. Range one to six is the limit to move the swing from side to side. An indication is marked on the volume switch to indicate the direction of the movement and motion of the swing.

Steel made frame or layout is the stand of the swing. This frame is robust and holds the seat of the swing with two steel made of rods. A plug-in is attached at the back of the frame to be put in the socket. It saves money and cost less compare to run off from the battery.

Battery box is placed underneath the seat of the swing. The box is wrapped up by the cover. If you take off the straps then the box will be seen. After putting the battery inside the box the vibration will be started off.

Four types or patterns of the swing are available. Kodiak, henson, stratus and abbington. These four patterns are base on the needs and demands of the customer. Customer prefers different colors and looks of the swing.

A manual guideline is to be provided with the swing. All the basic instructions are there to make it usable. Starting from assemble and ends to wash seat pad. No bleaching is allowed while washing the seat pad.

Yes, It does. 4 D battery options are there at the top of the swing.

Well it is very easy. A user-manual guideline will be provided with it.

After reviewing Graco Simple Sway Baby Swing  one must say that, this product is small but definitely puts a big smile on the new parent’s face. The footprint is small just like your baby. This product is really recommended the house with a small room or less space. It is made for lesser space room. The objective of this product is simple to keep your little one cozy and rest while in the baby swing. Buyers look for different option while they are reading product reviews. All the options for budget friendly buyers are presentable in this simple sway baby swing.